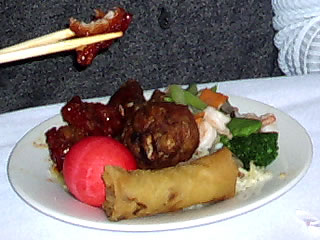 Ruby once told me that the Chinese have a saying: It is more profitable to raise geese than daughters. That proverb came to me today while celebrating the birth of Sandy’s son at her Red Egg and Ginger party. Not that the sentiment was expressed explicitly. But I heard it in the pride with which his relatives announced that Samuel is the first son of a first son of a first son of a first son and in the relish with which they called him “the royal baby.” Sandy was so beautiful and gracious and so exhausted. Later, on the phone with Red, I swear I could hear her eyes rolling as I told her about it. After all, she was the daughter who threw chairs at the kindergarten boys who tried to lift her skirt and see her underwear. And isn’t it funny that of the three siblings in her family, she’s the one who made good. As Red would say, “so funny I could just cry.”

This entry was posted in Home. Bookmark the permalink.