why i haven’t written all week… 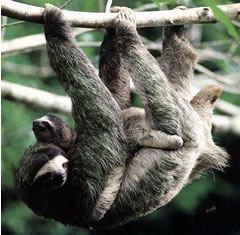 Actually, that’s a lie. I haven’t been slothful at all this week. Very busy. Michael found this picture to use as the basis for his Slug Man and Sloth Girl comic book. Wish he would get off his butt and actually do it, but I think he’s too sluggish. Or is it slothful? Maybe he’s Sloth Man and I’m Slug Girl. But I don’t think I can deal with the slime.

So, did anyone else read the article on “Cinema Therapy” in the East Bay Express? You can find the article here: http://www.eastbayexpress.com/ebx/so-how-do-you-feel-about-that-scene/Content?oid=1073072.  I guess I’ve been having my own private Cinema Therapy ever since I signed up for Netflix. And this month, with Oscars coming up in 2 days, has been particularly intense. Depression. Addiction. Violence. Loss. And as I mentioned last Friday, watching my own reactions to these things has been interesting. Wondering why all this violence leaves me cold.

Which brings me to the movies for this week. The antidote to the cold heart. Kmeelyon’s comment last Friday was, “you want tears? get yourself to see “in america,” already!” Kmeelyon was right!!! I went to see In America on Monday night after meditation. Okay, I know that having come from meditation group might have affected the way I received the movie. But leaving the theater, I swear, colors were brighter; downtown sparkled! I could have skipped down the sidewalk(and probably did!) Such heart! Such warmth! I cried and was happy! I’d see it again if anyone wants to go with me!

And another movie I’d see again is The Triplets of Belleville, which I just saw tonight with Susan. Fantastically weird, amazing animation! A great story. Now, I loved Finding Nemo, but I was thinking tonight about what makes a movie like Triplets so much more satisfying. And I think it’s that it doesn’t take anything for granted, like Disney movies do. So many weird, delicious details make the characters not just fun but actually interesting.

It’s just occuring to me right now how similar those 2 stories are: in both cases the son gets captured and the parent figure has to go find and rescue him. And in both cases, at least one parent is dead: Nemo’s mother and both of Champion’s parents. But in the Nemo story, the setup is short and cliched, as I recall. Father and mother find a home, lay some eggs, eggs and mother get eaten except for Nemo and Dad. Right? (Trying to remember.) Sad sad sad. But where are the details? Disney takes for granted the whole family values thing. They don’t bother trying to make you care for the characters. It’s prepackaged emotion. Like Bambi. Kill Mom = Instant Sadness. Whereas, in Triplets, we don’t know what happened to the parents. But what we see are all the details of the grandmother and grandson together in their weird little house and all the things she does to try and make him happy. It’s the expressiveness and quirkiness of the characters that make us care. The dog going upstairs every 15 minutes to bark at the train. The grandmother’s whiskers. Her whistle. Her vacuuming Champion’s calf muscles. Okay, now I’m giving too much away. Just GO SEE THIS MOVIE! Or call me, and I’ll go with you!

This entry was posted in Home. Bookmark the permalink.