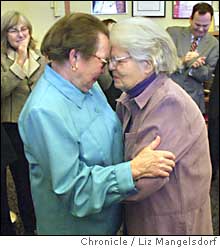 At 11:06 this morning at SF’s City Hall, Phyllis Lyon, 79, left, and Del Martin, 83, made history by becoming the first same-sex couple to be officially married in the U.S.. The ceremonies, sanctioned by Mayor Newsom in direct defiance of state law, continued throughout the day with at least 15 same-sex weddings performed at City Hall.