Most of the day was quite nice, actually. A box of See’s candy on the conference room table. A chair massage with candles in the office (our reward for reaching a sales goal). A beautiful pink sunset over Dolores Street on the way to Ruby’s. Spaghetti and garlic bread and TV: Boy Meets Boy and Queer Eye For The Straight Guy with Ruby, Mark, and Tomi. Why do I eat uncontrollably at Ruby’s?

Going home is when things get weird. First, the MUNI metro driver turns and smiles at me a couple of times while heading downtown. I smile back politely, and when we pulled into Embarcadero Station, he steps out of the driver’s booth and strikes up a conversation. Wants to know my name. Hands me his (apparently homemade) business card — T B Jr, Producer, Singer, President and CEO of Benstar Records — in case I feel like calling and hanging out sometime. Um… yeah. Right.

Next, I’m waiting in the BART station when a kid (late teens — early 20s maybe), seeing my newspaper, approaches and asks if I have the Sports Page. Just because I’m female I’m not going to read the Sports Page? The fact that I wouldn’t have read the bloody Sports Page is not the point. So I give it to him, which is his opening to ask for more. Can I tell him how to get to Tracy? I have no idea, but I don’t think you can take BART there. Can I lend him a dollar to get home? No way. I only have a dollar left myself, and at that point I am planning to use it for a bottle of water at the gym. Well, then will I come hang out with him in Modesto, since I’m so beautiful? Jesus! What’s going on tonight? Um… I’m probably old enough to be your mother, I tell him. He doesn’t believe I’m 38. I don’t believe he’s 29. You won’t come with me because I’m Arab, right? he challenges. Yeah, that’s it! I won’t come to Modesto with an unknown male at midnight because he’s Arab. How could he have guessed?!? Thankfully, he does not board my train.

I sit down and open the paper: “Pentagon to start futures market for terror attacks”. Huh? I thought Michael was making this up when he told me about it this afternoon on the phone. As the article calls it, “An Internet gambling parlor, sponsored by the U.S. government…” that will allow people to “bet over the Web on such questions as whether Yasser Arafat will be assassinated or Turkey’s government will be overthrown.” I feel as if I’m sliding off the edge of the earth. Or as if someone yanked away the table cloth and the dishes are all slightly askew.

Where is the world that I know? I go straight home. Do not go to the gym. Do not even look at anyone else. I close my apartment door behind me and breathe. Then, open my second pair of Invisalign aligners and put them on, almost a week too soon. They hurt. Good. Just now I need to feel that something is moving the way I want it to.

Met with Kitty Kotzebue and her partners at The Resource Corner. I’ll be going to their office the last Monday of each month to do an hour or two of bookkeeping. But the really exciting thing is that I get to edit their web page, too. I showed Kitty the page I did for Aunt Ann’s intranet, and she asked me if I knew HTML. “Do I know HTML? Ha! Child’s play!” I said. Okay, I didn’t really say that. But I did look at the code for their page and assure her that I could do whatever editing they need. So who are my web design clients at this point? Ruby, Jon Bernie (not up yet), Aunt Ann’s (private), and now The Resource Corner. Oh, and of course, myself. Anybody want a web site?

Met up with Mark afterwards and walked with him to Meditation. Nice and uneventful. Afterwards, had a bowl of minestone soup at Chow before going to the gym on Market Street. The BART ride home, once again, was filled with drunken young men. These guys I didn’t talk to, just watched with amusement as they swung like monkeys from the overhead railings and did flips and other gymnastic stunts. My first reaction was annoyance until I really started paying attention to them. Such exuberance. Such delight in their bodies and what those bodies can do. Of course, they were trying to impress a couple of girls who were with them. Why weren’t the girls doing somersaults, too?

Dreams about death and dementia last night — the first dreams I’ve entered into my Dream Log. Called Mark to make sure the parts about him were not true.

Art and more free food at a benefit for Brenda Prager, founder and curator of the Addison Street Windows Gallery. Brenda Prager was diagnosed with terminal end-stage cancer a month ago. I never knew who she was, but have enjoyed the Addison Street Windows every day on my walk to BART. (Pictures of the windows are now in the “Art Around Town” section of the Gallery. Many artists donated work to the show. The most moving work, though, were 3 large embroidered and painted photographs done by Brenda Prager herself: grandmother in knee-high support hose, daughter asleep in flannel shirt, flower in bud vase. They were not for sale. According to her daughter, Prager has done 20 of these works and never shown any of them before these three. Unfortunately, Prager was too sick to be at the benefit and couldn’t enjoy the acclaim her pieces received.

Based on our successful foraging this weekend, Michael and I have decided to eat for free as often as we can. Apparently the Hare Krishnas have a free vegetarian banquet every Sunday evening. You just have to listen to their plug. Can’t be worse than a time-share promo, can it?

soooooo exhausted this morning… why? and stomach in knots… stayed home from meditation group steering committee meeting… too bad; it was the first one… up (finally) and out at 4:30pm… sigh… walked down to Berkeley marina to catch the “tail end” of the kite festival (pictures here)… then on to Oshi’s Modern Combatives martial arts school open house, where they explained the theory of functional martial arts and fed as LOTS of free food… and back to Michael’s for more sleep…

Hey, remember where to stash your trash because we are: 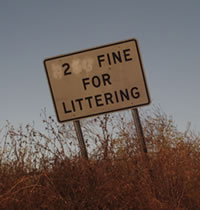 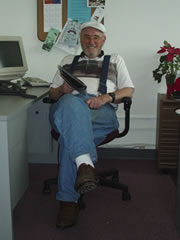 So last night, met up with Michael downtown and walked around aimlessly. Got ice cream from Thrifty (now Rite Aid); tried to see Finding Nemo again on digital screen, but the Metreon didn’t have it; bowled a game in Yerba Buena center (Michael made 2 spares and a strike! I made… well, we won’t go there.); thought about ice skating but decided to wait for a night when the rink isn’t so crowded with loud scary teenagers; rode home on the bus; got pizza and Chinese food and diet coke and watched Laurel Canyon on DVD. Frances McDormand is just soooo hot.

Thanks for the fruit salad recipe, Mark!

What is the difference between Yahoo publishing photos of Sadam Hussein’s dead sons and Al Jazeera showing the video of dead and captured American soldiers during the war? The United States was sooooo self-righteous about that incident. Now the first thing I see when I turn on my computer today is a photo of Qusai’s dead, bloody body. I feel like throwing up.

Claustrophobia is all over me today. So many wrong things in this world, and I can’t get away from them. Even gravity — can’t escape it. And this body… these aligners are making me crazy. My gums are sore, and each time I take them out to eat, I have to brush my teeth and brush the aligners before I put them back in. It makes snacking nearly impossible. But not wearing them is not an attractive alternative because of the rough cement nodules on my teeth that irritate my tongue. And that makes me feel trapped, impeded, caged. I had the same feeling on the elliptical trainer at the gym tonight. Boxed in. Restrained. Yeah, even though no one is forcing me to do these things. But if I don’t… this body holds me, requires maintenance. I don’t have children, but I still have to take care of myself. I’m not complaining, mind you. Just describing a feeling.

Whew! I just finished posting Real Audio excerpts from a City Arts & Lectures interview of Jonathan Safran Foer in the library. I listened to the interview on July 2 and have finally found the time to upload clips as well as write my own commentary on Foer and his book, Everything Is Illuminated. I think the interview clips are funny and insightful and just really enjoyable to listen to. Feel free to scroll down and skip all my verbiage if you just want to listen. I won’t be offended. Whoever you are. Click here for interview and book notes!

Jo Anne is away in Kansas until next Tuesday, so I am all alone in the accounting office doing both our jobs. It’s mostly nice and quiet. I enjoy working with Jo Anne, but I also like the solitude.

Got a nice surprise email from Keely this afternoon. I haven’t seen her since 2001 and our last email exchange was over a year ago. I’ve missed her.

Oh, also I won tickets to see Chicago at the Golden Gate Theater on Wednesday, Aug 6! This is the second MyBart drawing I have won. Michael thinks I’m lucky enough to run through forests blindfolded.

I’m sorry, America. I just can’t get excited about the news that the U.S. has found and killed Sadam Hussein’s sons, Uday and Qusay. I’m sure they were really bad guys. I’m sure many Iraqis are glad they are dead. Ding Dong and all. But killing people, no matter how heinous their crimes, is not something I can cheer about. It makes me sad. It makes me sad that we have such a cavalier attitude. I’m not saying the US did the wrong thing. Frankly, I’m not even sure that right and wrong are relevant distinctions here. I’m just saying that taking someone else’s life is not something to celebrate. That’s all.

Then today… well, here’s a picture. Can you tell what I did today? 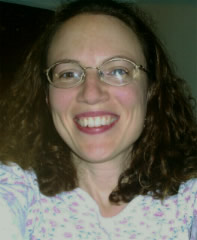 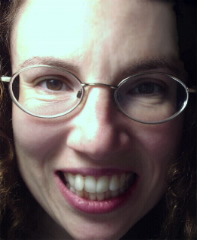 Still no? Okay, once more even closer… 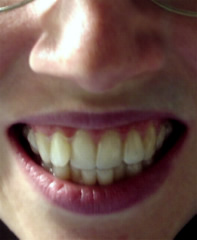 It’s Invisalign! The invisible braces! In under 2 years, I’ll have beautiful straight teeth. Provided I wear my aligners religiously, brush my teeth after every meal, avoid sweet beverages while wearing the aligners, and most important — don’t lose them like I did my retainers when I was a teenager! I guess we’ll see how much I have or have not matured since then.