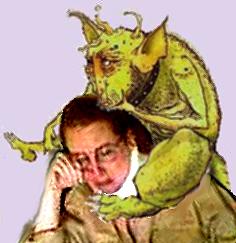 Allow me to introduce you to my gremlin. As you can see, he is the reason for my poor posture and sore shoulders. This picture was taken while my hair was still red, but he is here, weighing me down even now as I write. He whispers things like, “Stay in bed,” “Ignore the phone,” or “Don’t take your drugs.”

Lately, he has been trying very hard to get me to spend money I don’t have for things I don’t need but want very much. Like Macromedia Flash, a program for creating really cool animations, which costs $400. You can help beat this guy with just a small donation to the Create Another Terry Artist Fund. With enough $50 contributions, Beth can continue to be creative without sinking further into debt. Whattya say?

Posted in Home | Comments Off on a worthy cause…

Not sure if I like this new hair color. Email me your thoughts.

Posted in Home | Comments Off on look, ma! i made a poll!

gonads in the lightning…

Vicodin to kill an elephant and still couldn’t sleep. A huge electrical storm had caught us walking to the movies. Was scared and came home crying like a chastised child. Got up in the middle of the night and dyed my hair black to match my mood.

Tornado in Beltsville and College Park, Maryland today. Ripped the tops off trees and some University of Maryland dorms. Two people killed. Terry family freaked out. Dad warning about the end of the world and buying us gas masks for Christmas. (Or was that my sister, Ellen?

Amid all this fear of nuclear, biological,chemical, or any other kind of warfare, here’s one among us with a shred of humor still intact:

Michael’s Bin Laden Song:
Posted in Home | Comments Off on gonads in the lightning…

Up all night not taking my drugs on time, worrying about war, and trying unsuccessfully to teach myself Perl script so that I can update this bloody page more easily. Had my first appointment with a Kaiser physical therapist today. 2 months after falling on my head I FINALLY got an appointment. So I have lousy posture and can either do exercises to correct it or remain in pain. There should be a pill for this! Donna’s just getting up, so I guess it’s time to go to bed.

Have felt sick for days now. What is there to say? We’re all still in shock, and I’m ready to give my TV to Goodwill. Sent money to the United Way September 11 Fund. What else can I do?

Ushered with Michael for They Might Be Giants, whose music you are listening to. (Unless you hated it and turned it off.) They drove all the way from New York (since there are no flights) and were gratified that so many people turned out to have a good time despite the crap last Tuesday.

Opening for They Might Be Giants was a great new band called, The Incredible Moses Leroy, whose members include two Shari Lewis-esque sock puppets. After the show, we saw Ron Fountenberry, the group’s founder, in the hallway and, like so many other gushing audience members, stopped to praise his show. He was cute and happy — just like a little munchkin — hugging people and smiling the whole time. We told him that of all the opening bands we have seen, (and we have endured many many opening bands), his was the first we really liked. He asked us to come up to the stage and say, “hi,” the next time he plays. Performers are so accessible when they are first starting out. Later, when stardom hits, the little folk like us don’t stand a chance. Well, I’ll sacrifice my brush with greatness for this band’s success. Their music really is wonderful.

On the way home, had a semi-heated discussion with Michael regarding the (in)appropriateness of a Walgreen’s tractor trailer parked in the bus zone while making its delivery. Michael was anti. I thought it was okay in a city where there’s nowhere else to park.

It’s now 4 am and I haven’t taken my drugs. Something about plane crashes making me afraid to go to sleep? Nah. That’s just a convenient excuse.

Posted in Home | Comments Off on they might be giants…

THIS JUST IN: AMERICA IS PART OF THE WORLD AFTER ALL.

My roommate, Donna, woke me up just before 6am PST shouting, “A plane just crashed into the World Trade Center!” Donna is a school teacher and the only person I know who is up that early in the morning. I think I mumbled something like, “Bummer,” and went back to sleep. Moments later, she was in my room again shouting, “Another plane just crashed into the other World Trade Center building, and it looked like it was aiming right for it!” And then, “Oh my God! A bomb exploded at the Pentagon!” That got me out of bed. I didn’t leave the TV set until 10:45, when I took myself and my walkman to the bustop and listened to the news all the way to work. It was probably that walkman’s very first experience playing anything other than music. What an initiation.

Of course, we now know the details of what happened today. Four large jets were hijacked by terrorists. The first crashed into 1 World Trade Center at 8:45am EST and exploded. 18 minutes later, a second jet crashed into 2 World Trade Center and exploded. At 9:40am a third plane crashed into the Pentagon and at 10:37 the fourth plane crashed in Pennsylvania, aparently unable to reach its intended target. At 10am 2 WTC (which was hit lower down than the first) collapsed. I was on the phone with my mother when it happened and couldn’t believe what I’d just seen on TV. “It’s gone,” I kept telling her, “It’s not there. It’s just gone!” A half hour later, 1 WTC collapsed while we all watched. Those huge buildings were completed and destroyed within my 36 years. I can’t believe they are just gone.

Most of us Americans have long had the privilege of ignoring terrorism. It’s something that happens elsewhere. And War is just another reality TV show. We take our security for granted. And when acts of violence happen in other countries, we just go with our lives, many times blissfully unaware of them.

For myself, Sept 11 will be the day my psyche was brutally ripped from its warm, protective, American womb and flung into the middle of the world — the whole chaotic, unjust, messy world. I may still be hybernating in front of my keyboard for days on end, but part of my brain will be on active alert and my eyes ready to tear up at a moment’s notice.

Go down to the Basement for a tour of the horrors this day has dredged up. It’s a work in progress, so be patient. And please turn off cell phones and listening devices as a courtesy to those wearing pacemakers or controlling large aircraft.

Posted in Home | Comments Off on just plane evil…

Posted on September 8, 2001 by BethTerry
Posted in Home | Comments Off on cake concert…

Posted on September 6, 2001 by BethTerry

Was supposed to usher tonight with Keely for a gospel play at the Paramount Theater called, “When a Woman’s Set Up.” Wasn’t feeling well, so cancelled. Guess we’ll never find out what happens when a woman’s set up.

Posted in Home | Comments Off on we’ll never know…

pilgrimage to the temple…

Posted on September 5, 2001 by BethTerry

As Michael said, I’ve been living for this night my whole life. I’ve dreampt about hanging out with Madonna. Have nearly every magazine on whose cover she preens. Have done way too much disturbing art either depicting her or inspired by her.

She doesn’t sing particularly well, although she’s getting better, and she certainly can’t act. Every time she performs live on television I cross my fingers and hope really hard that she’ll get all the notes right. When I listen to her interviewed, I pray that she won’t slip into one of her weird accents or say something totally embarassing. Yet I own every one of her movies and albums. She is my idol.

Madonna represents what I wish I could be — someone who believes in herself so completely that she has taken the little talent she was born with and made a kingdom out of it. Someone who works so hard that at age 43 can do 14 deep knee bends at the end of every concert and hardly sweat, while I, more than 10 years younger, can hardly get out of bed most days. And someone who the critics will never understand or appreciate, and yet is loved and admired by millions, whether they agree with all her strong opinions and provocative statements or not.

I hope I never really meet her. How could she ever live up to my expectations? But in concert, she was bigger than I ever imagined. I can’t think of another performer who has made me shriek uncontrollably, and certainly not one who has caused me to hyperventilate. Listen for yourself: 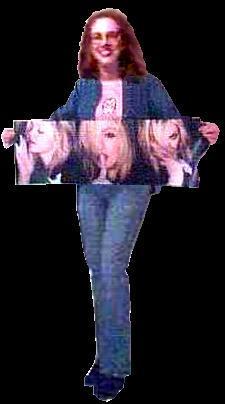 Hear Beth cry and hyperventilate at the end of this clip.

No, I didn’t take a tape recorder to the concert. Although I could have, as lax as the security was. A camera, too. No, these clips were from my cell phone to my friend Keely’s answering machine.

Posted in Home | Comments Off on pilgrimage to the temple…